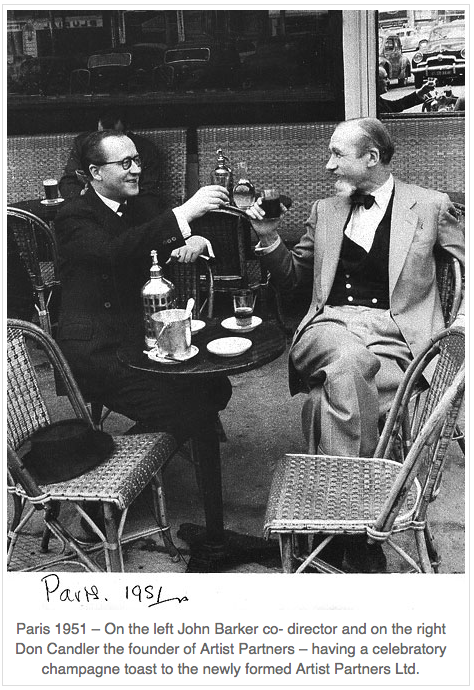 In 1950 G. Donovan Candler left a major London based artist’s agency to set up in business with L.A. Rix, Betty Luton White, John Barker and the designer Reg Mount. They did not solicit the representation of those artists, designers and photographers whom they had previously represented, but were nevertheless, inundated with requests from many of them for representation, and so in two rooms in Lower John Street, Soho, Artist Partners was founded.

Within three years the business had expanded to represent some fifty artists, designers, and photographers, and had moved to premises occupying three floors in a prestigious building in Dover Street, Mayfair.

Artists, and designers at this time included several who had already made their reputations on the war front, designing posters and information material – Reg Mount, Patrick Tilley, Tom Eckersley and internationally famous Andre Francois and Hans Unger. Great fashion artists of the calibre of Aubrey Rix, Alistair Michie and Beryl Hartland were represented. Figure artists who led the way during that era such as Susan Einzig, Harry Hants, Ken Wynn and Ben Ostrick worked across all fields of publishing and advertising both commercial and institutional, from small but brilliant drawings for the Radio Times to huge advertising campaigns and sixteen sheet posters.

This was an excellent era for the creative people as post war markets expanded and their skills were recognised as tools to advance the economy. The work of many AP artists was used at the 1951 Festival of Britain.

Things were done in style with drinks parties every Friday evening at AP making it possible for artists and clients to consolidate commissions over supper or at the Studio Club later in the evening.

By the early 1960’s the company’s reputation had grown and the AP list now included Jak the cartoonist and Michael Leonard – then a figurative artist. Designers of international repute came to be represented by AP in Britain and on the continent. They included Saul Bass, George Him, Patrick Tilley, Herbert Leupin, Savignac and Topolski. Photographers such as Zoltan Glass and Adrian Flowers made their reputations through the agency. AP offered expertise in every area of illustration, design and photography.

Later, in the property boom of the 1960’s, the Dover Street building was bought by developers and AP relocated to 14-18 Ham Yard in Soho (where remarkably it still is today). Sadly Don died prematurely. Betty White became the chairman and John Barker the managing director.

Because of the abundance of space in the new building, artists had the opportunity to hire studio space. Roger Coleman was the first to move in and Brian Sanders joined him. During the seventies and even into the eighties, the studio areas expanded to occupy two floors of the building, which became a hive of creativity, filled with other illustrators and encompassing all areas of the then current illustration boom. Many young artist’s like Brian Froud and Alan Lee were given their first professional opportunities in the AP‘s studios.

Following the merger with Virgil Pomfret and the artists from the collapsed Colmer Artists Agency, AP‘s studios housed some fifteen illustrators including some from Holland, Italy, South Africa and the U.S.A. Whilst approximately another 40 other major talents such as Barry Driscoll and Tom Adams continued to work from their own studios.

It was during this time that a vibrant young lady, Christine Isteed, joined to become the first point of contact for the company. After a period as managing director Virgil Pomfret left and both of Don Candler’s children Christopher and Tommy took turns in managing the company, before Dom Rodi took over. As with all other artists’ agencies coping with the changes brought about by new technologies, the nineties witnessed a period of retrenchment.

Today, AP is honed down but creatively fit and still bursting with the major talents of its illustrators.

Artist Partners shows great confidence led by its new managing director and chairman Christine Isteed, who is delighted to continue to serve the interests of the illustrators and valued clients alike.